New Children’s Book: Through the Eyes of Priya 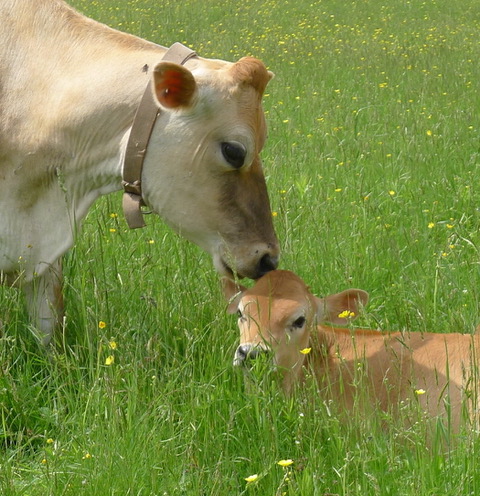 Allow me to introduce to you a dear friend of mine. Her name is Priya, and we became acquainted when she came to live on our property several years ago. Priya is a wonderful, rambunctious, deeply intelligent and often comical Jersey cow who lives here with other Jerseys and provides the sweetest, creamiest, most nourishing milk I have ever tasted. She and her pals delight us every day with the diversity of their personalities, their playfulness and the “street smarts” that they often employ to get what they want, such as finding ways to get to the other side of a fence without an open gate.

I was inspired to write, Through the Eyes of Priya when I learned of Priya’s history and discovered firsthand the inhumane practices of almost all dairy farms in the world. Not many of us are aware of the unfortunate lives that diary cows have suffered over so many, many years; their newborn calves are immediately taken away from them, and their own life is terminated at a very early age as a matter of course.

A century ago, cows on a diary farm would graze in herds on spacious fields, but with the onset of competitive large-scale dairies, most traditional dairies couldn’t survive. The cows in these mega dairies are given huge amounts of grain and hormones to increase milk production. They are treated more like machines than sentient beings, and if the machine breaks down, the attitude is, just get a new machine and out with the old one.

I had never written a book before, and my dear artistic friend, Debby Henning, had never illustrated a children’s book either. In fact, Debby hadn’t lifted a paint brush in over 30 years. Our united feeling was that we wanted to give support and recognition to our peace-loving cows and, by telling Priya’s story, bring to light the conditions under which most dairy cows live. As a young mother cow, Priya was saved from being slaughtered when she was only two years old. Her all important udder had been damaged, and she was no longer considered fit to serve as a dairy cow. A farmer can’t afford to keep a cow that isn’t giving milk.

Fortunately for Priya she ended up being adopted by an “Ahimsa” (non-violent) farm.

Priya can now graze on organic grass all day long and has the joy of loving and caring for her young calves. Last spring she gave birth to her 3rd calf, a beautiful little girl whom we call Dhanya.

This book gives a gentle look into the world of cows in the hope that it will awaken compassion in the hearts of mothers and children worldwide and inspire them to help create a better life for our precious life-nourishing friends.

The book is available for purchase on Amazon.