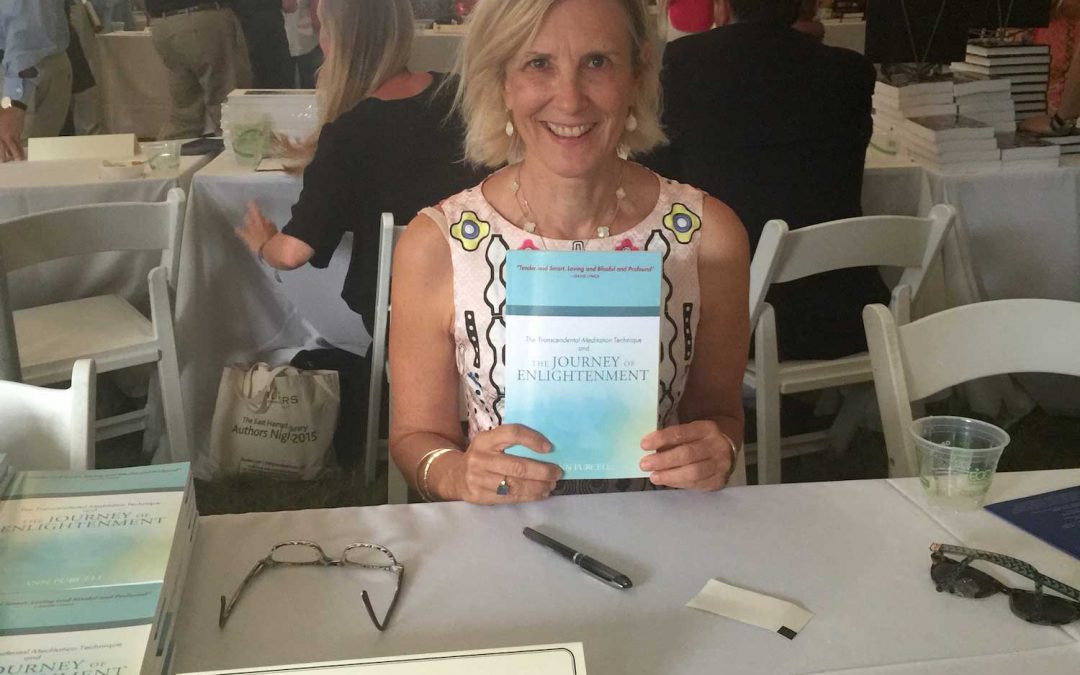 The excitement was palpable the very moment I walked into the tent that housed one hundred authors. Actor/filmmaker Edward Burns was the featured author and celebrity. There was press crowding around him, filming him. Within what seemed like seconds he had a long line of people waiting for him to sign books for them.

Author’s Night is a yearly fundraiser for the East Hampton Library. Hundreds of people come through this event to buy signed copies of their favorite books, which were written by the many notable authors.

The authors, luckily for me, were alphabetically seated inside four very long tables. Luckily, because it meant a known author could be seated next to a lesser known author like myself. My seat was next to Dan Rattiner, the founder of Dan’s Paper and a local Hampton’s legend. Naturally, he had many people coming to him for signings, which was an obvious plus for me! Seated on the other side of me were a gentleman and his sister, both of whom had happened to live in the same town in Florida, where I live in the winter. He knew my brother and some people in my family business. Meeting them made feel right at home, as they could not have been more helpful and friendly.

One noted author and spiritual luminary, Lama Surya Das, came up to me as I was standing around waiting for the event to start. He was very warm and friendly. Naturally, since both of us have devoted our lives to the spiritual path, we felt a deep connection and delighted in exchanging each of our books. He also introduced me to Rameshwar Das, who co-authored a book with Ram Das. When he heard my name, he asked if I am related to a friend of his. The person happened to be a cousin of mine—a small world.

To see photos and an official description of the event:

Dick Cavett was another high profile celebrity at the event. Before the official start time, he was sitting at his table with no lines. I went up to him and told him I saw his show in the 70’s when he interviewed Maharishi Mahesh Yogi. At that time he had learned Transcendental Meditation (TM) to prepare for the interview. I asked him if he still meditated and he jokingly said he medicated! I gave him a copy of my book, which he seemed to appreciate.

Within two minutes of sitting down, before the official start time, a relative of a former President of the United States, came up to my table and started asking me all sorts of questions about my book. She told me she had learned Transcendental Meditation recently in San Francisco. I did not know who she was, but my new friends to my right told me after she left. She could not have been nicer!

I was elated to have had a steady stream of people stopping by saying they had learned TM in the 70’s and wanted to get back into it. Quite a few people stopped who were practitioners of TM . Several people bought my book saying they had heard a lot of publicity about TM recently and that they wanted to learn. There were a few other celebrities there. One of the hosts of Author’s Night, Alec Baldwin, came with his wife. I saw him walk out with about ten books in his hand.

As the evening came to a close and the crowds started to disperse, I saw Ed Burns sitting at his table with no lines. I went up to his table to get a copy of his book, but they were all gone. I asked him if he would like a book on meditation and gave him a copy of my book. He looked at it and told that he had learned TM a while ago and maybe it would help him get back into it. I smiled and walked away. He called out to me and said, “You have to sign my book”!

It was an extremely enjoyable evening. I am already thinking of a new book so I can be in next year’s Author’s Night!