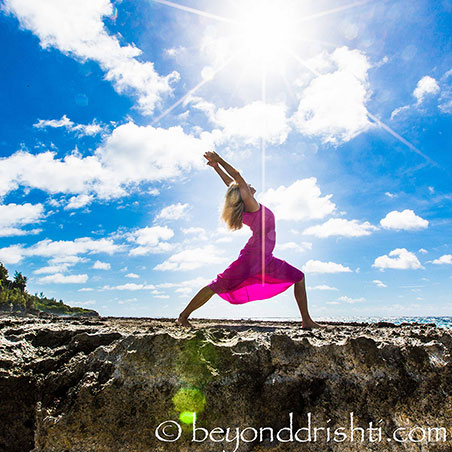 In 2013 the Smithsonian Museum featured the art world’s first international exhibit on the visual history of yoga, in Yoga: the Art of Transformation. A sign of the growing popularity of yoga is that the Sackler Gallery even raised $174,000 through crowdfunding for the exhibit, helped by 600 donors and others looking to enhance their yoga practice. Yoga in Bermuda, used with permission from beyonddrishti.com

The many types of yoga offered in the marketplace today are overwhelming. There is trauma sensitive yoga, yoga for anger, yoga for improving your posture, Christian yoga, yoga to cure desk ailments, yoga for increasing patience, yoga for back pain, yoga for energy, fizzy yoga, yoga for sleep, yoga for runners, yoga for pain, military yoga, broga yoga for men, laughing yoga, yoga for those over 50, yoga for toddlers, Bikram Yoga, Hatha Yoga, Kundalini Yoga, Iyengar Yoga, Anusara Yoga, etc.

All these types of yoga use different postures called yoga asanas. The immense popularity of yoga is simply because it is good for you—you most likely feel lighter and more flexible, peaceful and calm, after a yoga session. However, yoga asanas, while important, are only a small part of the Yoga Sutras of Patanjali, an aspect of the ancient Vedic literature that is the main textbook of yoga.

Yoga asanas, or physical positions, definitely play a role in aligning mind and body. The focus of the practitioner on their body, the stretching, and the long periods of calm focus, all serve to reduce stress and enhance health. But if you limit your practice to only yoga exercises, you are missing out on the real essence of yoga—enlightenment.

The word yoga is derived from the Sanskrit verb yog, which means to yoke, or to join. It is defined as the union, or joining, of individual awareness with its source in unbounded pure consciousness, the most silent level of our mind.

Maharishi Mahesh Yogi describes the state of Yoga in his commentary on the Bhagavad-Gita as:

“The height of realization … is to realize the supreme oneness of life in terms of one’s own Self. No diversity of life is able to detract from this state of supreme Unity. One who has reached It is the supporter of all and everything, for he is life eternal. He bridges the gulf between the relative and the Absolute…Yoga [Union] in this state has reached its perfection; there is no level of Union higher than this that he has gained. He stands established on the ultimate level of consciousness.”

The Yoga Sutras of Maharishi Patanjali explain that yogaś citta-vrtti-nirodhaḥ “Yoga is the complete settling of the activity of the mind.” When the awareness transcends and experiences the source of thought, the state of yoga–unity or samadhi–the mind, intellect, emotions, and body are fully integrated. Meditation singlehandedly takes care of integrating, or uniting, all these levels.

Are You Finding Meditation Difficult?

A common misconception about meditation is that it is difficult, requiring concentration or contemplation, which can strain the mind. The experience of the state of yoga is the most blissful, completely fulfilling state of life, and if given the right direction the mind will naturally settle down to more charming levels of its own nature. The technique of Transcendental Meditation takes advantage of this natural tendency of the mind to effortlessly go towards a field of greater happiness and the mind naturally settles down to quieter levels, transcending even the quietest level and experiencing pure consciousness—the purest state of yoga. Yoga and the State of Enlightenment

Many yoga practitioners who add Transcendental Meditation to their daily routine find it provides a deeply satisfying dimension of silence, awareness, and appreciation to their life as a whole; it also enriches their yoga practice. They feel a great leap in their spiritual evolution. This is because the experience of samadhi—transcendental consciousness—is the basis and ultimate goal of a truly blissful yoga practice. Samadhi, literally “even intellect”, is also the basis and the bridge to enlightenment, a state in which yoga, unity, has become permanently established in one’s life as a daily reality.

Enjoy bending, but to get the maximum benefits of yoga also enjoy transcending!

used with permission from beyonddrishti.com