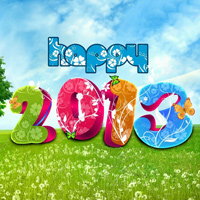 Happy 2013! There is a feeling of optimism in the air, especially as some recent news articles offer many indications of a better year to come. An article in The Spectator “Why 2012 was the best year ever” mentions that “Never in the history of the world has there been less hunger, less disease and more prosperity…We are living in a golden age.”

According to the article, extreme poverty levels were down 50% in 2008 compared to 1990, meeting one of the United Nation’s stated Millennium Development Goals 7 years ahead of time. Due to globalization, global inequality is also down, as developing nations are quickly rising. Fossil fuel consumption fell by 4% in the world’s richest economies, not because of government policies, but due to consumer demand for more efficient goods. People are living longer.  AIDS has declined by 50% in the last 8 years and deaths from malaria have fallen by 20% in 5 years. According to The Peace Research Institute in Oslo, there have been fewer war deaths in the last decade than any time in the last century. When you listen to the nightly news, it is hard to believe all this good news is true, but let’s face it, politicians often use bad news to claim they have solutions. If you look beyond the attention-grabbing headlines, there are many positive signs.

Another article in the Christian Science Monitor from December 2012 is titled “Bad news is loud. Good news rules”. “If you look behind the often dire headlines and examine the long-term trends, you’ll see that crime is falling, lifespans are increasing, and poverty is ebbing. In other words, there’s solid evidence for hope.”

In the last 2 chapters of Let Your Soul Sing: Enlightenment is for Everyone, I highlight many positive trends that are not being given due importance in the press. The basis of these positive trends is the spiritual awakening that is taking place around the world as millions of people practice yoga and meditation, quietly becoming familiar with their own inner blissful silence.

True change in society begins from within.

Mahatma Gandhi is famously quoted as saying, “be the change you wish to see in the world,” a slogan ubiquitous on the Internet. However, as Brian Morton of the NY Times points out, Gandhi more likely said:

“If we could change ourselves, the tendencies in the world would also change. As a man changes his own nature, so does the attitude of the world change towards him. … We need not wait to see what others do.”

In his commentary on the Bhagavad Gita (4:2), Maharishi Mahesh Yogi explains that, “spiritual development is the basis for all other forms of development”.

Good news will quietly rule more and more as people awaken to their own silence, grow in coherence, and start to act in ways that benefit not only themselves, but also our whole world family.

Wishing everyone a wonderful year of growing enlightenment! If you come across any particularly good news online, please share it by posting a comment below with the title and link.