The Dance of Creation 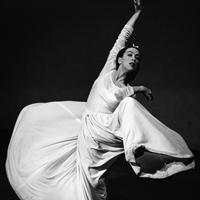 The dance of creation is a favorite metaphor of artists, scientists and philosophers.

In the words of famous musician and dancer Michael Jackson, “Consciousness expresses itself through creation. This world we live in is the dance of the Creator. Dancers come and go in the twinkling of an eye but the dance lives on.”

The philosopher Nietzsche declared, “I would believe only in a God that knows how to dance,” and Albert Einstein once described dancers as “athletes of God.” Creation may be envisioned as the dance of the Creator, and, in the words of modern dance pioneer Martha Graham, “dancers are messengers of God” speaking the “hidden language of the soul.”

Ancient Indian sculptors created bronze images of the dancing Shiva in His form as Nataraja, the Cosmic Dancer. The deity Nataraja is considered to be the source of all movement in the universe—all cosmic rhythms and cycles of creation and dissolution. Art scholar Ananda K. Coomaraswamy once commented that the rhythm, beauty, power, and grace of Nataraja “is the clearest image of the activity of God which any art or religion can boast of.”

There is even a statue of Nataraja at CERN, the European Center for Research in Particle Physics in Geneva, acknowledging Shiva’s dance as the cosmic dance of subatomic particles. As physicist Fritjof Capra points out, “Modern physics has shown that the rhythm of creation and destruction is not only manifest in the turn of the seasons and in the birth and death of all living creatures, but is also the very essence of inorganic matter,” and “for the modern physicists, then, Shiva’s dance is the dance of subatomic matter.”

Why these metaphors? Seeing one’s life and all of creation as a dance means seeing the underlying order, harmony, rhythm, and beauty in creation, seeing life unfolding gracefully, step by step. This naturally happens when we perceive finer, more holistic levels of life, which are inherently more unified and orderly. Artists, athletes, and scholars report glimpses of this unified reality in peak experiences, and they paint a picture for us, inspiring us by using the metaphor of life as a dance.

Meditation, meanwhile, is a silent, systematic way to spontaneously access holistic, unified levels of life on a regular, reliable basis. This is why millions of people around the world are practicing the Transcendental Meditation technique, including famous artists like David Lynch, Paul McCartney, Russell Simmons, and Oprah Winfrey. The great performer Michael Jackson once wrote about his experiences of Unity through dance, speaking not only in metaphor, but of his direct experience: Taking these words to heart and keeping the metaphor of “the dance” a lively vision, one feels inspired to move through life with grace and harmony, staying in step with all of creation. Sometimes it may be challenging when the music changes its tempo or tune, but by enlivening our connection to the Unified Field through meditation, our “dance” becomes more joyful, natural, and fluid, allowing us to join more fully in the perfect dance of creation.

This is a guest post written by R. Busch